My brain injury had a very strange side effect. I could not stop making things. I became an artist because I couldn't follow directions anymore. Because I was left with language processing problems, sequencing and memory deficits, impulsivity, and poor organizational abilities, using a pattern was virtually impossible.

My process is haphazard. For art, this seems to work well. I spend a lot of time looking at pretty pictures and fabrics. I use my iPhone to take tons of photos of stuff I see that looks cool. I play with my materials creating odd textures or just cutting fabric and sewing it together.

For years I have been promising my daughter I would make her a quilt from her old t-shirts. I think she gave up hope a long time ago. She told me once that she didn't think there really was a t-shirt quilt, that it was just something I said to get her t-shirts and throw them in the trash. It's like that farm where parents say that pets go to because they don't want the kids to know the dog died, she said.

Well, it was not a lie. I saved them and for her 30th birthday (What!) I made a quilt. But it was REALLY hard. During the whole sewing process, I realized that despite all my deficits, I still have one of the best qualities anyone can have. IMHO. Perseverance! Stick-to-it-iveness! Stubborn determination!

So here's how I did it"
I'm back to finish this post. I couldn't publish until after my daughter's birthday. I finished the whole quilt in a week and on July 2nd she was surprised and happy to see her favorite shirts from 10-20 years ago. 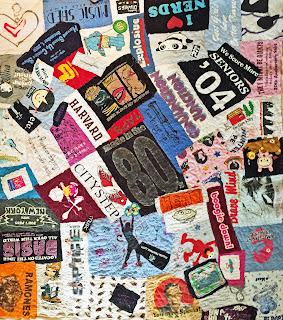 This is a terrible photo. The quilt looks very cool in person.

I think you did an AMAZING JOB!!!I LOVE IT