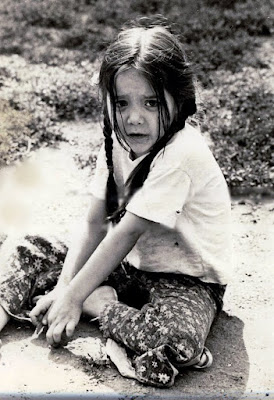 I think I have posted about this before but I just feel the need to say it again. I had a weird dream about a transitioning blond wo/man and it played out in my mind like an epiisode of Criminal Minds. At first I took it for granted that she was a she not a he, but gradually it began to dawn on me, even thugh she was so pretty and feminine... And then awake I think, "All people in my dreams are me...So? I don't see."

When I was young, 8, 9, 10, 11, 12, 13, my dad played softball and coached my brothers' baseball teams. An equal opportunity father (sometimes), he made me practice too. It was the seventies and the Feminist Movement was in full swing. I took Aiki-do for self-defense and promised my dad I would not go into a profession pigeonholed for women. I retrieved my mother's bras from the trash, hid them, and then secretly wore them stuffed to pretend I had breasts. I also learned to play ice hockey which was a great thrill. All suited up in the protective equipment, from shin guards to helmet, I realized even when I fell or threw myself in front of another player, it didn't hurt.

Softball practice with my dad was another matter. Things would always start out okay with my dad alternating between throwing at me, Tim, and Matt, but sooner or later the boys were dropped from the rotation because I could not follow the simple command of, "Stop throwing like a girl!" We were not allowed to say, "I'll try," or "I'm trying," in my family because those words automatically meant, "I am leaving myself an opening to fail." I will do it or I will not do it. Those were the choices but no one dared choose the latter. So the ball was fired at me harder and harder, the grimace on Ed's face meaner and meaner, and the words bellowed louder and louder: "STOP F*#@ING THROWING LIKE  GIRL! It only stopped when I began cowering from the ball, jumping out of the way to avoid getting hit, crying tears of defeat, or the sunset prevented any accurate analysis of my technique.

I always wanted to say, "I am a girl, a little girl, a little girl who will never be a professional athlete, so it's okay if I throw like a girl," but that would have been labeled a cop-out. Despite my tiny stature, myopic bespeckled eyes, and complete lack of coordination, I was expected to perform like a man. Not just any man, maybe Dave Winfield. When I started seventh grade in 1974, I got new sneakers. Super Pro Keds, size 1. SIZE 1. That is how small I was. I could still wear some of my Size 6x, 7, and 8 kids clothes. I was the smallest person in my class every years from K to 8. How do I know? We had to line up in size places for every transition. I led the line for graduation in 6th grade and again for 8th grade.

After months in the planning, my first sweaters are for sale on Etsy. Now you know why I never call you. Check it out:

Shout out to my peeps:
A.R. I am thinking about you and wishing you a speedy recovery. I love you!
R.F. You have the patience of a saint! 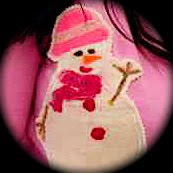 S.E. You are my inspiration. Would I really be making these if I thought you were worried about what other people think? You wore the first one, pumpkin dumpling, cuddle bunny, and you wore it with pride! You fashion plate, trend setter!
at 7:29 AM 2 comments: