Creating and making: solitude suits me

I am never happier than when I am in my sewing room, playing with materials. Occasionally I make something very cool. This is a throw that I made from recycled sweaters. I am trying to use them up but I keep buying more. It is so fun to wash them and see how they felt. Then I love to cut them up and sort the different colors. Mostly, I just love to touch all the different fabrics. They speak to me, each one alive with potential. 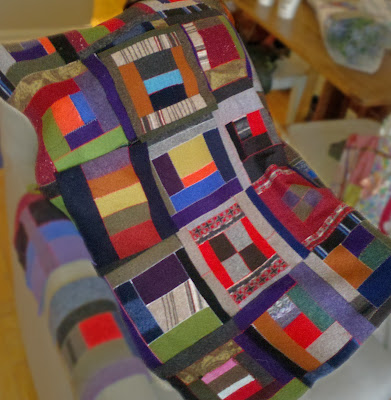 It is hard to tell what it really looks like in this photo (which my dear friend Jo took for me). In real life the colors are much more muted, less bright, less contrast, darker hues. You can see a couple of extra squares on the arm of my chair in my faded background.

My art got press in Albany, NY

I was diagnosed with a TBI in summer 2008. In Feb 2007, doctor's discovered I had a cavernous angioma nearly embedded in my brain stem after I had a bleed. I had surgery 2 months later and the doctor's were very excited with the results. I went back to work 6 months later full time as a sixth grade math teacher. Although during my recovery time, I thought things were a little different, it was being at work that revealed major deficits.


During my search for answers, my parents reminded me that I had suffered a serious concussion when I was in sixth grade, over 35 years earlier. I was running down a slide (brilliant) in a playground and I tripped at the bottom flying forward and bumping my left temple on a cement turtle. I do not know how long I was unconscious. There was little supervision in the yard of my overcrowded public school. I had only been at the school a couple of months but my regular teacher was also absent that day so I spent the afternoon drifting in and out of sleep on a couch in the classroom next door.


When my father picked me up from school, I vomited and then he brought me to the emergency room. They made my parents wake me up every hour that night and look out for any liquid from my nose or ears. That is all I remember. Then I went through puberty. If there were personality changes who could tell?


My father who remembered the incident best died in August 2008 and with him I lost the chance to learn any other significant details. My search for medical records was futile because of the amount of time that has passed. It is mind-boggling to me that some of the obstacles that have plagued me my whole life might have stemmed from this. I have always been extremely impulsive physically, acting in dangerous situations. This resulted in many more injuries. Despite my lack of coordination, I felt compelled to climb over a wall if it was a short cut, lunge on tennis courts, and run and trip while trying to catch subways. More stitches, bumps and bruises to my head. My husband used to call me Action Aly before the surgery (well, he still does sometimes right before he insists I show restraint).
at 6:16 AM No comments:

I mailed my two fiber collages to Albany today. I am hoping they will be in the art show. They are both 14" by 14." Machine and hand sewn, embroidered, drawn using layers of burlap, linen, gauze, brocade, tulle, lace, and organza. This is the statement I included:

I am 49 years old. In sixth grade during recess I ran down a playground slide, tripped, and hit my head on a cement turtle. I was knocked unconscious and diagnosed with a concussion. I was never very coordinated and New York City playgrounds were not very safe places to play in 1974.

Five years ago, I developed a severe headache, numbness down my left side, and some other strange cognitive symptoms. An MRI showed that I had a cavernous angioma (benign blood vessel tumor) in my brain stem that was leaking blood into my brain. I had to have brain surgery to remove the tumor.

Six months later, I tried to return to work as a middle school math teacher. It was a disaster. My long-term memory for the math is still good but I could not do my job. I was diagnosed with Cerebellar Cognitive Affective Syndrome. My brain injury changed my whole life and my identity. Everything feels like chaos, but my art makes sense. 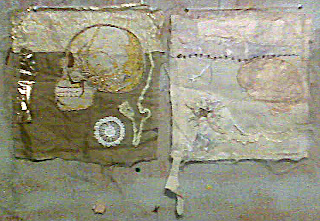 They said I could write up to 500 words but I was never going to mail it unless I just wrote something fast. I think that is good enough. I hope it is good enough, anyway. Here is the flier so if you are in or near Albany between February 13th - 17th, you should stop by.

Here are the deets.

President's Day weekend marks the 5 year anniversary of the hemorrhage that led to the discovery of my tumor. It is a good time for a fresh start. I mourn the loss of Aly Version I, but I have a new operating system Aly Version II. I am still working out the bugs but there is no turning back now.