PUT DOWN YOUR RULER

Yesterday, I officially withdrew from my Masters degree program. It makes me so sad to say that. Sad is an understatement.

Although the only action I needed to take was to write a short letter to the director of the program, my instincts to preserve my sense of self rendered me paralyzed, unable to execute this task for months.

I taught for 22 years. Prior to my surgery, I had spent the previous 12 years as THE sixth grade math teacher. When I started teaching just math, there was an honors section and three regular classes. Although it was not called "honors" and followed the same curriculum as the other sections, everyone knew it was the "top" group. It was a lot of fun teaching that section. It was not easy like many teachers thought. It was challenging and exciting and it was where I found my real strength as a teacher. When they did away with the advanced section, it became my personal mission to find a way to teach the gifted math student in a regular math class. A successful system would be one that benefited all of the students.

After my surgery, my return to work was a spectacular disaster. In previous years, Labor Day weekend meant the return to school to dust off materials, make a few copies, and label all the student supplies. In 2007, I returned to my classroom in August to prepare for a new year as I had always done. That first day back, I found myself sitting on the floor crying. I had been there for 5 hours and had accomplished nothing. It was the teacher who had subbed for me during my absence who consoled me, encouraging me to be patient with myself. For a fleeting moment, I felt like everything would be okay.

Month after month, things got worse and worse. I could not learn my students' names. I had never used lesson plans before. I had never needed them but suddenly, I was writing things on the board that made no sense. I could not talk and write at the same time. I could no longer do anything that required thought if there was any noise at all. Good luck trying to silence a group of sixth graders so you can string together an intelligible sentence. On the rare occasion I was able to get everyone to completely freeze and not utter a sound, my method for reaching that state was so alarming that my students were too terrified to process whatever it was I had wanted to say.

The advice I got was the same from everyone. Stop trying so hard. You don't have to be the perfect teacher. Just go in and stick to the plan. That is good enough. Even if I could have done that, it would have been so out of character for me. I had been a great teacher because I loved doing it. I loved the students. I loved the material. I loved a challenge and I was creative in my strategies for problem solving. I could get the classes' attention by whispering, by speaking another language, by singing my lesson, by doing a silly dance, or even by whipping out a puppet to take over the lesson. My favorite was my king puppet.

I got King Puppet at the Bank Street Book Store. I was drawn to him because his beard was so soft and furry. I used to love to bring him out at the start of our measurement unit, exclaiming simultaneously, "Take out your RULERS!"

After the first year back, my class load was cut in half. The next year, all of my classes were taken away and I was asked to work with just a few students who were gifted in math. Although, I was beginning to get a picture of the damage my brain injury did to my abilities as a teacher, I was, for the most part, in denial. It felt like a nightmare, being stripped of my responsibilities, my title as chair of the math department, my esteem in the community. However at the end of that third year, I thought I had found my new post-injury place. Although I could not plan a lesson or teach a whole group, I could work with one or two precocious kids whose needs I could assess on the spot. My long-term memory for math was intact so with help I was able to retrieve materials and introduce a new enriching and stimulating topic to a kid who was bored out of his mind in his regular class. That spring I applied to and was accepted into the Three Summers Masters Program in Gifted Education at the University of Connecticut. I think I remember blogging about being like the scarecrow in the Wizard of Oz. If I couldn't have a brain at least I would have a degree.

Fast forward to today. I stopped teaching last year and day after day, week after week, month after month, I have begun to accept that I cannot teach anymore. I wanted to hold onto a tiny bit of possibility. I thought I wanted to pursue the degree so at least I could write about the subject. If I had lost my reputation as an expert in my field, those letters after my name might be an acceptable substitute. Although some of the schoolwork was manageable, most of it required skills I lost like planning. Officially dropping out of the program was like admitting defeat, letting go of the last lingering hope that I might some day wake up from this nightmare and be my old self again.

My cognitive therapist helped me write the letter during a session. It took me 2 weeks to type it up and then I finally printed it and popped it in the mail. When I was shutting down the computer, I realized I had not dated the letter. Oops. Nothing I can do now. 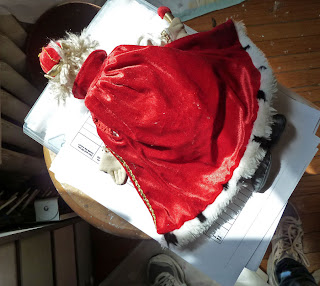 Later in the afternoon, I was cleaning up and this sight caught my eye. I am not sure how or when he got there. Framed in the glow of the sun through the window was King Puppet laying face down on a stool. How perfect! How beautiful! How symbolic! The King Must Die! It took awhile but I was finally able to let myself put down my ruler.
at 2:50 PM

Congratulations! Letting go of the past will be so liberating for you. I know you loved what you were doing before, but now you just need to find something new to love....that suits you today. I'm happy for you, I think you are freeing yourself up to actually be able to live again in the present. Beautiful!