In 1974, 3 of the 4 kids in my family were kicked out of the Children's Community Workshop School. Suz was already at Performing Arts by then. The rest of us had to leave because the school asked for tuition. It had been free but I guess it just wasn't working without funds from the parents. We contributed in other ways, the food co-op, the storefront thrift shop, but I guess it wasn't enough.
I remember getting up at 4 o'clock in the morning and driving in a truck to Hunt's Point (quite an adventure for a 10 year old) to buy wholesale produce. One of the few times I ever saw my mom cry was when an old lady tried to barter some shopping bags for a block of the cheddar cheese.
The thrift store was probably where I developed my love of old clothes, that musty smell of moth balls, damp wool, exotic laundry soaps. My mom liked to volunteer to sort the new donations which gave us first pick and also meant maybe some items never actually ended up being donated. Hmmm. I am beginning to see our "contribution" in a slightly different light. 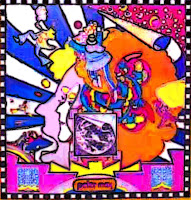 My favorite thrift store find was a pair of denim shorts in a Peter Max print:

I loved them so much that when I outgrew them, I sewed the legs closed and attached a handle to make it a bag.

I was diagnosed with a TBI in summer 2008. In Feb 2007, doctor's discovered I had a cavernous angioma nearly embedded in my brainstem after I had a bleed. I had surgery 2 months later and the doctor's were very excited with the results. I went back to work 6 months later full time as a sixth grade math teacher. Although during my recovery time I thought things were a little different work revealed major deficits. During my search for answers, my parents reminded me that I had suffered a serious concussion when I was in sixth grade, over 35 years earlier.

During a game of RCK (RUN CATCH KISS), I was desperately running away from Fernando a 14 year-old boy in my class. There was no way he was going to catch me because I really, really did not want to kiss him. I was running down a slide (brilliant) in a playground and I tripped at the bottom flying forward and bumping my left temple on a cement turtle. I do not know how long I was unconscious. There was little supervision in the yard of my overcrowded public school. I had only been at the school a couple of months but my regular teacher was also absent so I spent the afternoon drifting in and out of sleep on a couch in the classroom next door. When my father picked me up I vomited and then he brought me to the emergency room. They made my parents wake me up every hour that night and look out for any liquid from my nose or ears. That is all I remember. Then I went through puberty so if there were personality changes who could tell. My father who remembered the incident best died in August 2008 and with him I lost the chance to learn any other significant details. My search for medical records was futile because of the amount of time that has passed.


It is mind-boggling to me that some of the obstacles that have plagued me my whole life might have stemmed from this. I have always been extremely impulsive physically, acting in dangerous situations. This resulted in many more injuries. Despite my lack of coordination, I felt compelled to climb walls if it was a short cut, make off-balance lunges on tennis courts, and run and trip while trying to catch subways. More sticthes, bumps and bruises to my head. My husband used to call me Action Aly before the surgery (well, he still does sometimes but then insists I show restraint).
at 8:56 AM